Impacts of Cases of Sexual Harassment on Campus Communities  Part I: Who is the “campus community” and what is its role?

Note: This is Part 1 of a 3 part series on how campus communities respond to cases of sexual harassment by faculty

When a case of sexual harassment occurs on a college campus, two parties are typically identified, the perpetrator also known as the “respondent” or person who has done the harm and the survivor/victim, aka “complainant” or person who was harmed. But in fact there is a third party to the crime or harm, the campus community.

Campus communities are deeply impacted by high profile cases of sexual harassment accusations against faculty and administrators. As the story gains traction in the press, and universities face investigations and lawsuits, donors may start to ask questions and supporters lose trust. Low morale takes hold across campus, affecting people at all levels–students, staff and faculty–as people lost trust in those in power, feeling they are protected from those who would abuse their power. 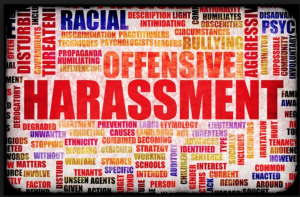 As a third party to cases, campus communities are also seen as accountable. In response to a case, systems are in place for some form of adjudication and discipline. When those systems fail, the campus becomes the target of investigations and lawsuits, individual administrators are questioned as to their culpability, people are called out in the press; some are fired or demoted. The integrity of bystanders is also raised.

In sum, campus communities are involved and impacted by the harm in complex and contradictory ways. Breaking it down to the individual level, members of the campus community who are impacted include those who:

(Before the harm occurred):

(As the harm is occurring):

(After the harm is reported to officials): 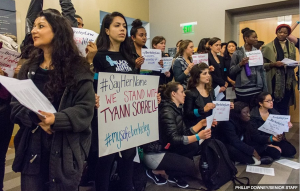 As a case of sexual harassment–especially one that is high-profile–unfolds, the “campus community” subdivides into multiple communities who begin to see each other with suspicion, fear, disdain, outright hostility.

Such a climate puts campus communities in a more “punitive” mindset--they want to see people involved in the case fired and punished in other ways. People are not necessarily looking for a “restorative justice” to these cases.

But without some kind of restorative response, the campus community will remain divided and distrustful and unable to work together for change. People will be denied an opportunity to come together to develop their collective wisdom on how to address the underlying conditions that allow sexual harassment to occur, to engage in transformative justice together.

A vibrant Restorative Justice program on a college campus can play a role in bringing together the campus community in response to cases of sexual harassment.

Through a Restorative Justice lens, an act of crime or harm impacts three different individuals or groups:

When an incident occurs, it is not always clear who is included in the category of “the community.” To determine who constitutes the community in a case, RJ practitioners have a series of preparatory meetings with the specific individuals and community members involved to ask: “who has been impacted” and “who are the people who can provide (individual and institutional) support in this process.” From the answers given, a community starts to take shape. RJ practitioners work to further develop a “community of care” made up of people who can offer institutional perspective and resources for repairing harm and who can take accountability for implementing change. 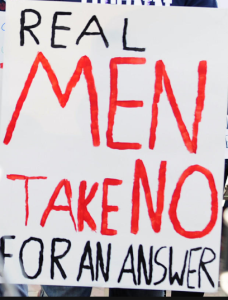 As suggested above, the scope of the campus community impacted by a case can be broad, and determining who would like to participate in a restorative process will be a large but important project.

In its purest form, RJ brings together the individuals who were harmed with those who harmed them. During a restorative process (a restorative conference, harm circle or peacebuilding circle), the question of needs is raised. The person who was harmed is asked: what do you need to make things right? The person who did the harm is asked what they believe the harmed party needs from them. They are also invited to think about their own needs in the wake of harm to bring about changes which will reduce the likelihood of a repeat offense.

In this process, the community members gain a full understanding of the needs of those who have harmed and been harmed, and can play a critical role in responding to those needs. They also have a chance to explain what they need from the person who was harmed and that becomes part of the final plan going forward.

Bringing together all participants in a case is not always possible. Those directly affected may not want to participate. The community may demand a swift, punitive action. But the restorative response can take many forms. In the wake of toxic and divisive cases, community members can come together separately from the individuals who were directly involved to talk about their needs and obligations in response to the harm that they have experienced.

Within a restorative process, community members can play a major role in addressing the accountability of the community in creating and exacerbating the conditions in which the harm could occur. And as needs are discussed, so are obligations of the community in addressing those needs. Ideally, by establishing spaces that feel safe and authentic for thinking together, communities will figure out what is needed to move forward and additionally, who will spearhead the change. In the process, they may also begin to repair relationships that have been damaged by the case.

Previous Campus Climate and Racial Justice: The Need for Restorative Justice
Next Welcome to **active listening** at UC Berkeley!