Speaking at Boalt Law School to celebrate the 20 Year Anniversary of the Human Rights Law Clinic on Thursday, October 4, Michelle Alexander suggested we take the long view on the impending Kavanaugh confirmation. Her words were roughly:

Her theme was the same as her debut piece in the New York Times, where she’s now an op ed columnist. It holds a vision that takes us out of the weeds, out of the win-lose mindset of the last few weeks:

A new nation is struggling to be born, a multiracial, multiethnic, multifaith, egalitarian democracy in which every life and every voice truly matters. In recent years, we’ve seen glimpses of this new nation at Standing Rock, in the streets of Ferguson, in the eyes of the Dreamers, in the voices of teenagers from Parkland and Chicago, as well as at L.G.B.T. pride celebrations, the Women’s March and the camps of Occupy Wall Street.Confederate statues are coming down as new memorials and statutes are going up in Montgomery, Ala., and beyond, honoring victims of lynching as well as the courageous souls who fought for the abolition of slavery and the end of Jim Crow.

Regarding changes in mass incarceration, Alexander warned the audience not to accept the “tinkering around the edges” of justice reform, where jail cells are replaced by virtual cells of round the clock digital monitoring and expensive ankle bracelets, or what she called “tools of decarceration.” 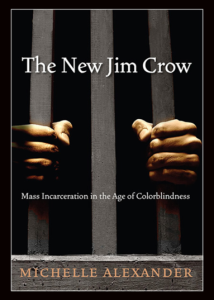 Don’t just tear down systems without a consciousness of care and concern, she urged. We need positive action to construct an entirely different system, and that includes restorative justice. Going more in depth in her NY Times piece:

The disorienting nature of Trump’s presidency has already managed to obscure what should be an obvious fact: Viewed from the broad sweep of history, Donald Trump is the resistance. We are not.

She asked us to rekindle our radical imaginations, to think beyond the law to consciousness, to address the bigger questions of liberation.

The essence of liberation theology around the world: all of us or none… 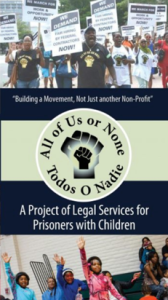 What would it mean to decolonize our minds and let go of fear of the other, she asked, expanding this vision to the global context:

Vincent Harding, one of the great yet lesser-known heroes of the black freedom struggle, the long, continuous yearning and reaching toward freedom flows throughout history “like a river, sometimes powerful, tumultuous, and roiling with life; at other times meandering and turgid, covered with the ice and snow of seemingly endless winters, all too often streaked and running with blood.”

Harding was speaking about black movements for liberation in America, but the metaphor applies equally well to the global struggle for human dignity and freedom.

Previous What is Good Facilitation for Restorative Justice?
Next Anti-Violence Activists Talk About What Is Accountability