Texas lawmakers are interested in shutting down state-run juvenile incarceration facilities in that state, not because holding youth in correctional institutions is unjust or immoral, but because of high costs:

According to CSG, each juvenile inmate in a state prison costs $134,000 per year. Moreover, $162 million was spent on 800 youth offenders last year alone. Legislators and experts contend that moving the inmates to local probation programs, rather than staterun prisons, would cut costs dramatically.

The figure of $134,000 accounts for both per-person spending (about $60,000) and overhead costs that include the construction of new facilities.

The Texas Juvenile Justice Department has also been under scrutiny since a 2007 report documented cases of physical and sexual abuse by guards.

For the past few years, youth have been moving out of state-run and into county-run facilities, some of which used high levels of solitary confinement and other inhumane procedures.

But now goal is to adjudicate more cases through county-level probation departments, especially for youth with non-felony charges. State officials note that probation programs, unlike incarceration, may reduce recidivism, which for youth who have been incarcerated in Texas, occurs at a rate of 52%. 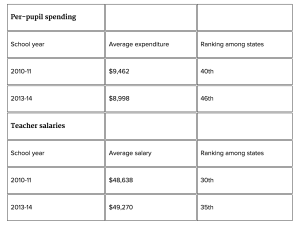 In 2014, Texas spent an average of $8,998.00 per K-12 student,down from previous years. This doesn’t include all the overhead costs associated with building schools and running school systems, which are included to some extent in the $134,000 figure for housing a youth in a juvenile facility.

This is how the California Legislature’s Legislative Analysts Office breaks down the spending on a “juvenile justice ward:”

While reducing spending is not the best reason for closing down state-run juvenile facilities in Texas, it is a good start. But imagine if we spend just a fraction of the money allocated for juvenile offenders on youth in schools and our communities before they got into trouble? 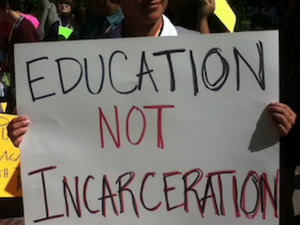