by Viviana Lletget and Julie Shackford-Bradley on May 20, 2015

Cal students presented testimonials and strong arguments in favor of a temporary moratorium on the Berkeley Police Department’s (BPD) use of such “crowd control” tactics as the shooting of tear gas canisters, rubber bullets and other projectiles, the use of flash-bang grenades, and “over the shoulder” baton-strikes during non-violent protests. As one person put it during the comments session at the Berkeley City Council meeting on February 7, 2015: 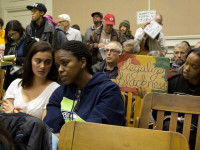 After months of delay, the City Council voted unanimously in favor of the moratorium, which lasts for 6 months while the Police Reform Commission (PRC) investigates what happened during the night of December 6, 2014 and subsequent nights of Black Lives Matter protests on the streets of Berkeley and Oakland. Some questions remain about the moratorium, questions that speak to larger issues regarding the BPD’s calls for “mutual aid” from neighboring Police Departments, BPD’s own rules of engagement, which are not transparent, and most pressing, what constitutes “non-violent protest.” In response to the latter question, Council Member Jesse Arreguín briefly explained the criterion for determining non-violent vs. violent behavior that had been laid out in a 1992 Berkeley City Council document:

Category #1: “Cooperative” –those who, after having accepted arrest rather than obey a lawful order to move, cooperate with the arresting officers (e.g.,stand and walk to a transport vehicle when asked todo so by an officer).

Category #2: “Nonviolent/non-cooperative –Those who are passive and neither obstruct nor assist officers in the process of arresting or removing them (e.g., those who go limp, refuse to move when ask to do so, and require that they be carried).

Category #3: Non-violent/resistive –Those who, after a verbal command, are either sitting or otherwise immobilized, and actively exert themselves (e.g., but refusing to unlink arms) and resist lawful police efforts to move them.

Category #4: “Non-violent active” –Those who are not stationary, but who are non-violent and not engaged in aggressive behavior directed at police or others (e.g., people standing in a crowd that has been told to disperse).

Council member Arreguin also gave an impassioned speech about the events of December 6, 2015, when protestors took to the streets for “advocate for their rights under the constitution to say that black lives matter” and his commitment that we “learn from what happened” and “change the way that we respond to protests and to large crowds.” He and others also referred to the fact that the city of San Francisco, which sees its share of protests, banned the use of tear gas two decades ago.

At the City Council meeting, questions were also raised about who instigated the violence at the protests on Dec. 6 and Dec. 7. While it is hoped that these questions can be answered by the Police Review Commission investigation, some commenters voiced concern about the willingness of the BPD to be fully cooperative and transparent in the process. UC Berkeley students from the Black Student Union (BSU), have been at the forefront of protests on and off campus as part of the National Black Lives Matter movement and for police reform here in Berkeley and Oakland, working with the Associated Student government, Graduate student groups, and other engaged students who showed their solidarity at the February 7 City Council meeting to ensure that the rights to free speech and free association are recognized in Berkeley, which claims fame as the birthplace of the Free Speech movement.