"[W]e hope that private prison divestment campaigns, with the abolitionist vision of a larger anti-prison movement, can help us start working towards divesting from the idea that prisons equal justice, which we believe to be fundamentally racist." – Dunni Oduyemi

Following an extremely successful 16-month student-led campaign, Columbia University recently became the first university in the United States to divest from the private prison industry. As a direct result of student pressure, Columbia’s Board of Trustees voted to divest $10 million from for profit prisons.

This campaign was led by Columbia Prison Divest (CPD), a subcommittee of the Black-led student group Students Against Mass Incarceration. Following in the footsteps of other great divestment movements such as the fight to end South African Apartheid, CPD organizer Dunni Oduyemi explains that “all of the work was done by students and especially students of color on this campus.” Students worked diligently to pressure Columbia University to divest its roughly $10 million in holdings from Corrections Corporation of America (CCA) and GEO Group as well as G4S [pdf], the two largest private prison corporations in the US, a corporation notorious for deporting immigrants and providing security at Guantanamo Bay.

[n]ot only reaping profits from existing systems of oppression, these companies have played major, active political roles in the creation of policies that further criminalize marginalized communities through participation in conservative organizations like the American Legislative Exchange Council (ALEC) and lobbying for racist policies like harsh sentencing and ID laws. 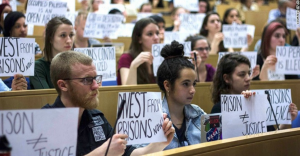 These private prison corporations are major components of the multi-billion dollar for-profit prison industry. The number of for-profit prisons doubled between 2000 and 2010, with some companies’ profits increasing 500%. People of color and immigrants are disproportionately detained in these private prisons, and the conditions of these facilities are notoriously egregious.

Inorder to maximize profits and maintain full occupancy at private prison facilities, these corporations have worked to pass legislation increasing criminalization (particularly in communities of color) and have pressured politicians to ensure that prisons remain 90% full at all times. According to the UC guide to Divesting from Prisons [pdf], CCA and GEO have spent over $31 million on lobbying the US federal government since 2002, and an “additional $14 million on campaign contributions” in order to push for policies that force more people into prisons and detention centers for longer periods of time. 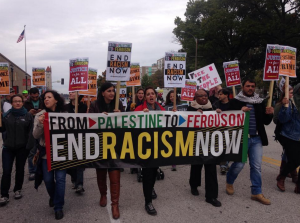 Image via Funders for Justice

For us, prison divestment has been an entry point for addressing the ways in which students at elite colleges and universities are directly and specifically in the privileged positions that we are because of systems of inequality. The racist, classist images of ‘criminals deserving of punishment’ are created in tandem with images of ‘hard-working college students deserving of opportunity,’ and each is defined in relation to the other. Through prison divestment, we have worked to challenge these narratives and structures.

Using for-profit prisons as an entry point to address a series of interconnected issues, CPD organizers also brilliantly weaved together the connections of racism and violence inherent within the Prison Industrial Complex, immigration, and the occupation of Palestine into their discussions of divestment. Columbia Prison Divest has explicitly made connections between injustices committed by these corporations here in the US and abroad, and their relationship to systems of oppression. Private prison companies have played a crucial role in militarizing the US border, as well as policing and detentions in the occupied West Bank and other regions. CPD organizer Imani Brown explains that “[f]rom the start, we wanted to establish those links that what’s happening globally is happening domestically.”

Prisons are not Justice 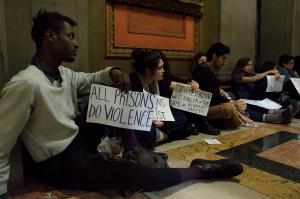 Their persistent efforts catalyzed a national dialogue about the injustice of the Prison Industrial Complex and what can be done to change this oppressive system. Since the start of this campaign, prison divestment campaigns have sprung up at over a dozen universities, as well as many other institutions including unions, churches, companies, and even cities. Student organizers see this victory as a first step in addressing and dismantling the prison system, fitting into a larger vision of prison abolition. CPD Organizer and Co-founder Asha Rosa explains that “[d]ivestment is not just about financially divesting, but about divesting from the notion that police keep people safe and that prisons establish justice.”

As Columbia Prison Divest and other groups have made clear, the Prison Industrial Complex is an inherently violent and racist institution. According to Critical Resistance, a Bay Area prison abolitionist group, “the [Prison Industrial Complex] defines itself by punishment, authoritarianism, racism, profit-seeking, and state control.” Many people from marginalized communities avoid calling upon the state and the criminal legal system to address interpersonal violence due to the violence that is so often inflicted upon them by these very institutions.

By challenging the notion that prisons equal justice, questions are being raised about what alternative forms of justice could look like. Conversations are taking place more than ever before about how to create effective systems of accountability that do not involve prisons and mass incarceration.

It is through this lack of viable options to secure justice that more and more communities are looking to Restorative/Transformative Justice practices to provide accountability, healing, and justice outside of the criminal legal system.

Although Restorative practices are not new, and have existed for thousands of years within indigenous communities, punitive/carceral justice has been the norm for centuries within Western contexts. Restorative/Transformative Justice breaks away from this punitive tradition, and can provide just, logical alternatives that seek to radically transform society and the oppressive power dynamics at play.

Transformative/Restorative Justice practices may look different in every context and for every community, which is what makes them so unique and applicable. There is no one-size-fits-all approach to dealing with harm and accountability. There are, however, some general Restorative principles that are typically used as guidelines.

According to Restorative principles, justice “is achieved when persons causing harm understand the impact of their actions on others and take responsibility by making amends to the persons and community harmed.” Restorative and Transformative Justice processes typically employ community accountability processes which are designed to hold the person who has harmed accountable for their actions and the pain that they have caused. This is intended to provide “peace and healing to persons harmed, reintegrate responsible persons back into the community and, ultimately, to construct community capacity to manage crime and other harm.” 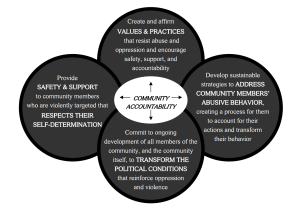 Restorative practices seek justice over punishment, and acknowledge that there are more effective, humane, and just ways to deal with problems rather than locking people in cages. In imagining alternatives to mass incarceration, Critical Resistance maintains that ideal alternative justice practices “would strive for personal and social transformation, accountability, equality, fairness, understanding, cooperation, sharing, solidarity, forgiveness, popular participation, and self-determination.” These processes give people and communities more agency to resolve their own issues with contextual specificity, ensuring that their needs are met in a way that is best for the people harmed and the community.

The actions and dialogue that have emerged from Columbia University’s victory have been of critical importance. The work of Columbia Prison Divest is brilliant in the way that it ties together many connected issues and highlights the problems at the root of the private prison industry. This victory has sparked imaginations and catalyzed discussions centered around a world defined by community accountability and justice.

For more information about the Prison Divestment movement or how to get involved, as well as more information on Restorative and Transformative Justice, please check out the following resources: