This post is the second installment of a seven part series on the history of political action and suppression at UC Berkeley that will be released throughout the spring semester of 2022.

One aspect of my Berkeley experience that has lived up to expectations is the prevalence of on-campus demonstrations. However, alongside the relatively strong culture of civil action, there exists an interesting sort of counter to the counterculture. I am referring to the great proportion of students at any given time who take a willfully apathetic or negative attitude toward the frequency or character of political efforts publicized around the campus. The reasons for these attitudes are complex but I believe they firmly reflect an ignorance of the campus’ history with regard to political action. Most current students are largely unaware of the political conditions under which Berkeley activists began to cultivate a national political presence. As such, many implicitly remove Berkeley’s revolutionary reputation from important historical context and dismiss what they see as frivolous or inauthentic. My hope is that by analyzing the Free Speech Movement(FSM) and its legacy, we can more fully appreciate our value as student activists in a sociopolitical system that struggles to change. I seek to discuss the FSM to promote the truth of the past and construct a foundation for political negotiation in the future. The FSM story allows us to understand the pressures acting on University officials and inform a better model for successful perseverance against political suppression. The events associated with the Free Speech Movement began in September 1964 when the University sought to enforce a prohibition on general political action in the brick walkway area at Telegraph and Bancroft. While generally recognized as being off-campus, the area was claimed by the Regents as University property. At the time, Sproul Plaza and the main campus were not able to be used for political purposes under University policy. The strip at Telegraph was supposed to be excluded from political action as well, but this policy had been unenforced. In the 1964-65 school year, the University announced they would be enforcing the ban with their stated goal being to end the growing use and misuse of the area. In response, eighteen student organizations formed a coalition and proposed to the University that the space could continue to be used for advocacy. These groups – who would later become the Free Speech Movement – stated that they planned to pursue civil disobedience if the University refused to concede. The University offered an alternative arrangement in which Hyde Park would be accessible for speeches and the Telegraph-Bancroft area could be used for strictly limited purposes. The students refused to accept and, sure enough, civil disobedience ensued.

In terms of outcomes achieved, the Free Speech Movement is by far the most successful political campaign that I will explore. Student activists began by asking for non-enforcement of the policy affecting the Telegraph-Bancroft strip and eventually won the general removal of political advocacy prohibitions on campus. For months, negotiations failed. Students refused to give up their ability to advance their political aims on campus and the University found ways to frame the conflict around the particular actions of the students. Rather than adjudicating upon the issues at the core of the policy disagreement, the administration and law enforcement repeatedly centered in discussion the nature of student action which they considered improper. 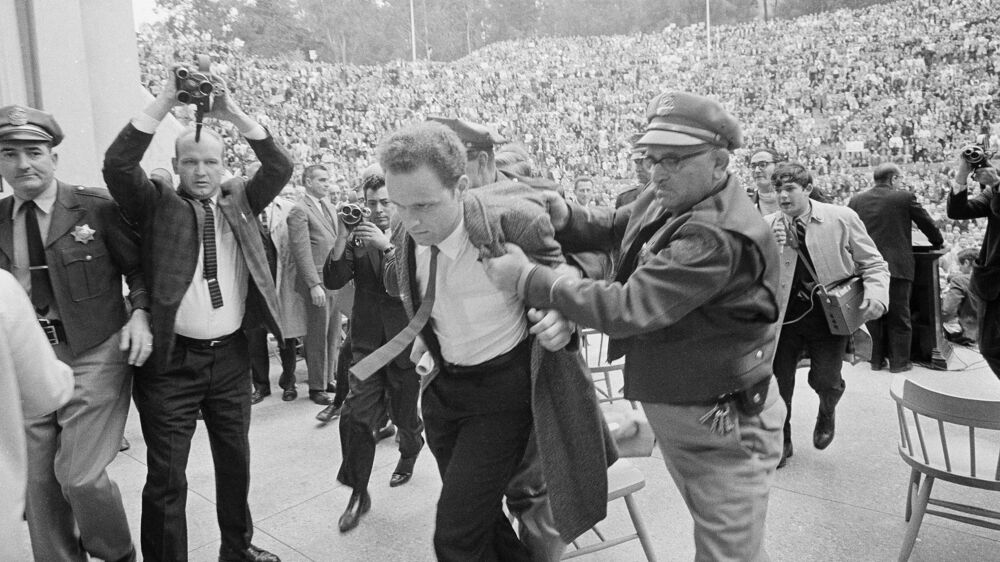 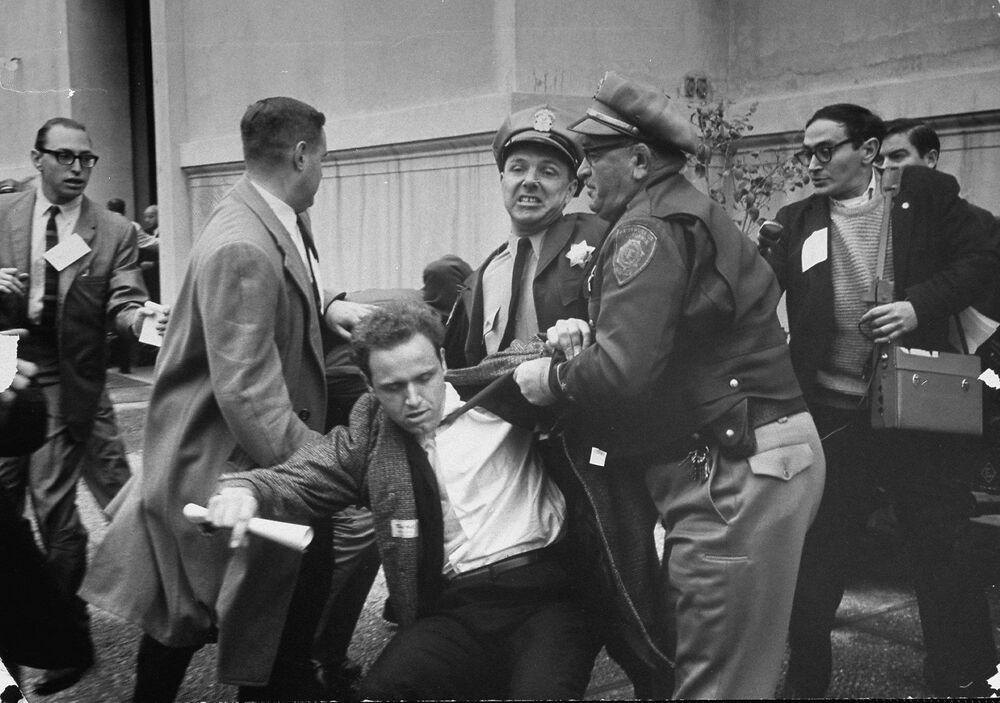 The administration’s continued emphasis on discipline and procedure fits within a long legacy of powerful bodies upholding the status quo by condemning the disruptive conduct of those seeking to advance change. In 1964 and 1965, hundreds of students participating in the free speech protests were arrested or were direct recipients of violence enacted by University and state government officials through law enforcement. The legacy of such action lives with us today as conservative forces continue to rely on protesters’ supposedly improper conduct to justify sidelining their grievances and imposing harm upon them. As citizens engaged in civil disobedience, we must be mindful of the tendencies of those in power to operationalize our disruptions as a means to act unjustly. We can also learn from those who prevailed over such efforts. Ultimately, at the end of the '64-65 school year, President Clark Kerr announced a new set of student conduct policies regarding political action. Students won the right to express themselves freely on campus, subject to time, place, and manner restrictions to prevent interference with University functions, as well as keep standards of student conduct consistent. This new policy was based on recommendations from a committee appointed by the Regents and reflected input directly from the FSM. It is largely the arrangement that we function under today, and it is regularly utilized to propel causes both against the university and otherwise. Today, Sproul Plaza functions partially in a critical role as a public forum of dissent.

As a UC Berkeley student in 2022, it feels difficult to comprehend how our administration once stood so boldly against the political values we now take for granted as being part of our University character. Importantly, our modern perceptions of the University’s values are partially grounded in the events of the FSM. Thus, understanding the conflict requires situating it within historical context. One important factor is that prevailing norms around education and politics supported the University’s ability to take a suppressive position. The University administration even cited a clause of the California State Constitution in its defense. Moreover, the political context around FSM gave University officials a massive stake in asserting the non-advocacy policy. The substance of the FSM controversy was clearly not the only dynamic at play. This was a time when societal power dynamics were increasingly apparent to students. Protests for civil rights and against the Vietnam war were putting pressure on high level government officials. These officials would have shared interests and dinner tables with those in positions of authority in the University of California administration. Berkeley students posed a problem by being outspoken against the actions of the government. In 1965, they won their right to continue speaking out.

The significance of the FSM comes in part from how clearly it revealed a problem in our political discourse and how empowered students felt to do something about it. What happened in 1964-65 was important in itself but also for what it allowed to happen in 1968 and beyond. The University will continue to be beholden to great power structures and students to new thinking and incentives for change. As progressive and open as we imagine our campus leaders to be, and no matter how strong we expect our voices to be, we can never lose sight of that reality. The University administration today evidently appreciates the Free Speech Movement in a historical framing. We are now graced with a Free Speech Movement Cafe, a testament to the University’s openness to change. Yes, the reception and use of donated funds to name a cafe after the movement is a set of actions limited in scope, but it has great symbolic value. In a politically dynamic university like UC Berkeley, sociopolitical tensions requiring civil disobedience will continue to come to a head. As a student, it is powerful to have this history to point to. Should our current administration become reactionary or suppressive to the controversies which now animate our student body, we have the ability to draw upon this legacy of successfully speaking truth to power. We have a model for transcending ‘the rules’ when they prevent justice. We have the awareness that not every time that we push against authority must we lose. 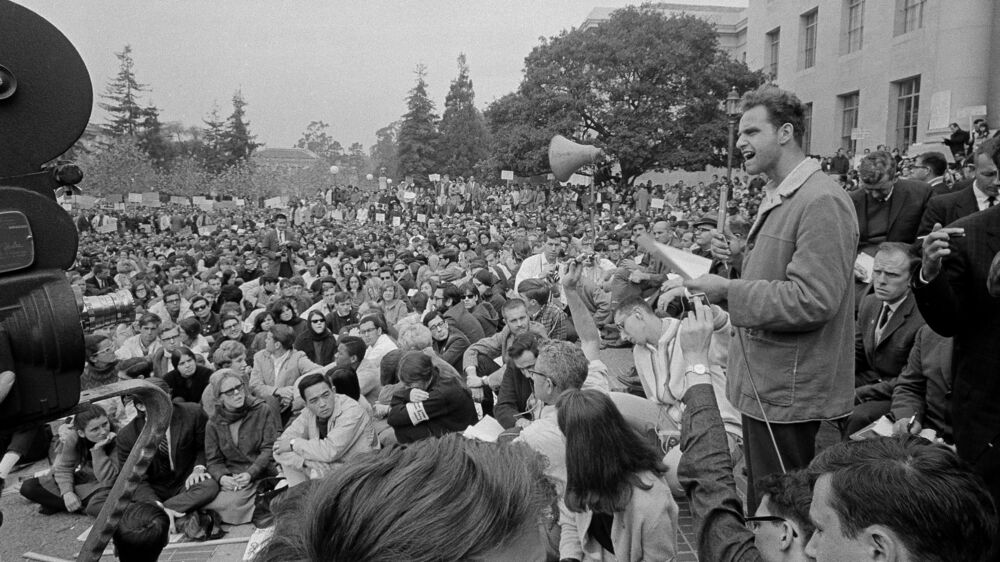 Previous Introduction to The History Of Political Suppression on UC Berkeley Campus
Next Who is obligated? An inquiry on algorithmic harms