What to Expect from Trump Era Guidelines on SVSH

We’re currently in the middle of the comment period, so please take advantage of that opportunity to have a voice in these matters.

The website know your ix has made it easy to write and submit a well-crafted comment. They’ve also devised a short description of the major changes in the rules. Or, you can take a deep dive into the actual policy.

Note to UC folks: the Office of the President (UCOP) has issued a statement here. The UC system is also in the process of revising their policy, which defines SVSH and explains the adjudication and appeals processes on campus.

The Trump administration changes are stark, especially in the ways they curtail a university’s obligations in responding to certain behaviors.

For example, changes to the definition of sexual harassment make it far more difficult to make a case, thus reducing campus’ obligations to respond:

Relatedly, Title IX offices would not have to respond to cases of sexual assault where the Complainant (victim or survivor) is not enrolled in the campus or part of a program (for example, if a person not enrolled was assaulted by students, whether on or off campus). Or, if the events took place among students, but in locations where the campus had no official association (as in off campus housing or in some study abroad programs), even though:

Many—if not most—incidents of campus sexual assault and harassment occur off campus, says Sage Carson, a manager at the nonprofit Know Your IX. Eighty-seven percent of U.S. college students live outside campus bounds, and it’s common for assaults to take place in a student’s place of residence. Accusers at community colleges, where, in most cases, all students live off-campus, will be particularly affected by this clause in DeVos’s rules.

Here’s some data recently gathered at UC Berkeley (pg. 30 of the report) about where sexual harassment occurs: 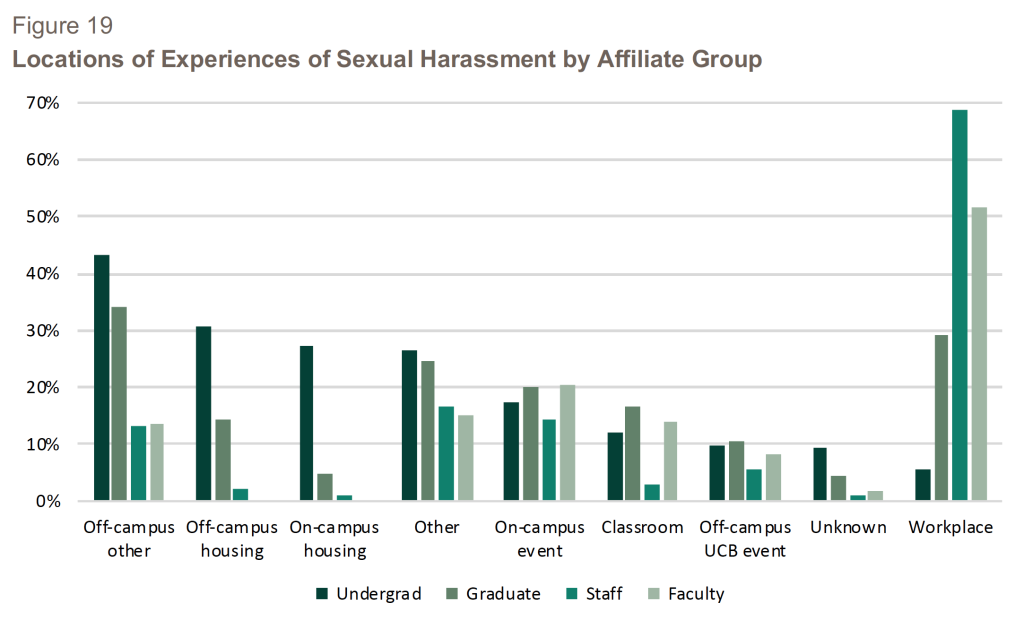 Notably, for undergraduate students, a large percentage of cases occur in off-campus spaces. Under the new guidelines, campuses won’t need to know about those cases.

And campus administrators are less responsible for knowing about SVSH cases on their campuses. Under older guidelines, campus administrators could be held responsible for not responding to cases when they “reasonably should” have known about them. This pushed campuses to be more strict about reporting, requiring everyone associated with the campus to take the role of “responsible employee” and notify the Title IX office when they were told about any type of case of sexual assault or harassment. Under the new rules,

A formal complaint is one made to “an official who has the authority to institute corrective measures,” not, for instance, a residential adviser in a dormitory.

In other words, campuses are only obligated to know about and respond to formal complaints made directly to designated campus institutions, not those reported through responsible employees. 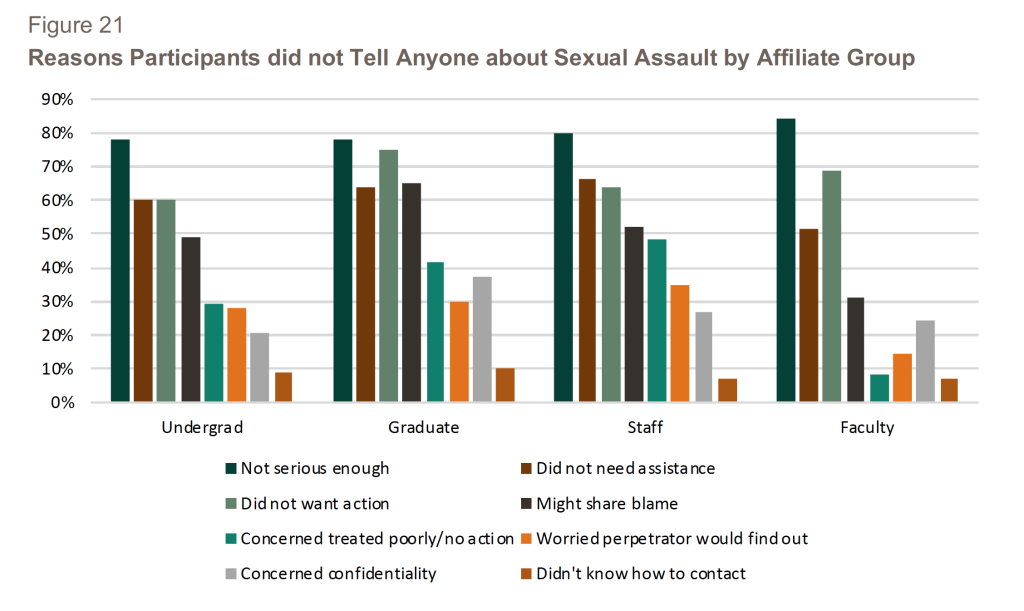 This chart shows that 30% of undergraduates, 40% of graduate students, and 50% of staff members thought they would be treated poorly if they reported unwanted sexual activity. Roughly 30% of people in each of these categories did not report because they were afraid the perpetrator would find out.

The new rules would require survivors to out themselves to campus officials in ways that we already know raise an array of concerns. We know anecdotally that students fear having their parents contacted (perhaps inadvertently). This data shows that students and staff fear being treated poorly, namely, having their behavior scrutinized and investigated or not being validated in other ways. Further, they fear some kind of response or retaliation from those they are reporting on. These are major barriers to reporting, even under the current system. If schools only have to acknowledge cases reported through official channels, (not through third party “responsible parties,” the facts about what’s actually happening on campus will be even more distorted than they are now.

The less campuses know, the less they are required to respond, whether on the adjudication side, or the support side (which has grown tremendously to meet students’ needs over the past 10 years). Schools have made great gains in providing support services for victims/survivors, whether or not they report. It’s possible that decreased “knowledge” of incidences of SVSH will allow campuses to reduce resources in those areas.

A major red flag in the new guidelines is the notable absence of the word “consent.” Where the word “consensual” does appear in the new rules, the focus is “reducing governmental regulation” of what is termed “consensual, non-criminal sexual activity.” That’s it. In future blogposts, we’ll talk about how the focus on positive consent has revolutionized the way people think about gender and sexuality. In the world of these guidelines, it’s as if we’ve erased the last 10 years.

The new rules appear to ignore much new data, both qualitative and quantitative, that’s helped increase reporting, improved campus responsiveness and brought about institutional change. The new rules make life easier for campuses in some ways, but in others, the rules suggest a determination to thwart the progressivism of the last 10 years. Not surprisingly, many are finding it hard to see these new rules as good faith efforts to increase fairness and justice.

Previous Anti-Violence Activists Talk About What Is Accountability
Next Due process and justice on college campuses: The Rights of the Accused in the Trump Era