What Makes a Criminal?

Criminal (noun): 1) One who has committed a crime. 2) A person who has been convicted of a crime. This is the definition given by Miriam Webster, and essentially the same as all other definitions of the word that I could find. But if you’re trying to understand how the word is commonly used, this definition is of little help. That’s because people simply don’t think of everyone who has committed a crime as a criminal. There are so many crimes and most of us know plenty of people who have committed at least one. But we don’t think of ourselves as surrounded by criminals.

That this is true might not be very noteworthy. Different crimes obviously have different levels of severity. Someone who shoplifts some snacks from a grocery store might technically be a criminal, but they’re not in the same category as a murderer. But is severity really the only source of distinction between a person who has committed a criminal act and a person who is generally considered a criminal? I would argue that not only are there other factors by which most of us distinguish these two groups of people, but that severity of the crime committed is not even the most central factor.

The easiest way to see this is to look at drug crimes. There are lots of people who consume illicit substances that are not 'criminals.' College students and celebrities are two groups that come to mind as being known for using a large amount of substances but who wouldn’t be generally considered criminals. Even for dealers, the principle holds. After all, college students and celebrities are not necessarily getting all of their substances externally. It seems likely that there is quite a lot of distribution going on within these communities. Are those people criminals? And if so, why not? 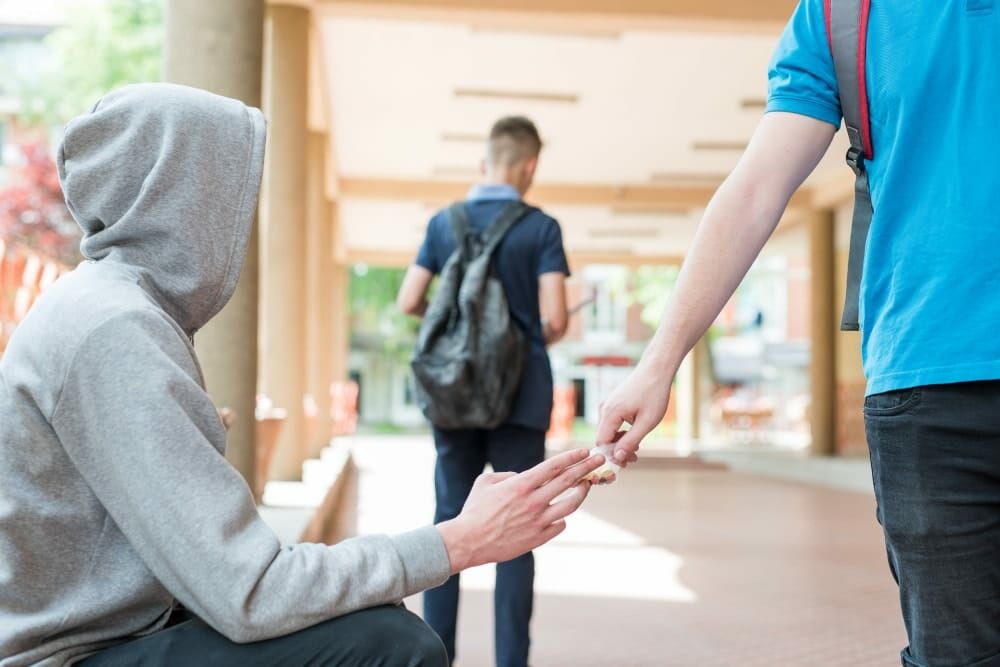 This apparent contradiction is not limited to drug crimes, however.  What separates a bar fight from a gang fight, embezzlement from burglary? The more you think about it, the more you realize that to think of a person as a criminal is to define them by the criminal act or acts which they commit. Some of these distinctions might be accurate. You might feel entitled to say that an otherwise honest, caring person who used to sell drugs on the side or occasionally gets in a fight is different from someone whose entire livelihood is crime.

However, this requires making quite a lot of assumptions about a person’s livelihood in order to assess judgement to the acts in question.  And while I do believe that people could be differently defined by the nature, extent, frequency, and impacts of their criminal acts, I do not believe that there are any clear standards that would allow us to accurately make these judgements about other people. Moreover, I believe the sources of these distinctions are not arbitrary. Rather, they largely track how we would otherwise feel about a person based on their proximity to ourselves. This inevitably makes marginalized people, particularly lower class people of color, most likely to be referred to as criminals in political discourse.

For middle and upper-middle class students and professionals, it's tempting to minimize crime as evidence of moral corruption and poor choices. We see the harm first, and we're taught not to like people who harm others. It's difficult to take the extra step and try to understand. But when we leave out the context, we ascribe moralistic judgement unfairly, and we enhance the effects of marginalization.

People naturally use context and nuance to assess moral culpability. One example of this is our love for the anti-hero. We're willing to withhold simplistic judgements for celebrities, historical figures, and characters who seem to blur the line between good and bad. In fact, there's a part of us that roots for them extra hard because they demonstrate how fallibility can be redeemed. Here, proximity is not an issue. When someone's whole background is in the public eye or expressed to us through narrative, it's possible for us to appreciate their complicated identity. This is even more true for people that we know closely or that we love. We may see that what they've done is wrong, but most of us would not think of a family member or friend as a criminal. Their other identities mean more to us.

Knowing a person’s whole story makes it harder to define them by their worst features. As someone who grew up in a wealthy suburb free from violence, I'll admit that it wasn't until college when I could understand that environments where poverty is ubiquitous present you with a totally different set of constraints and decisions about how to define your life. People have choices, even if they're limited, and knowing context doesn’t remove blame. Nevertheless, at this point in my life, I am confident that to a very large extent people defy definition as a criminal. I would argue that this isn't a rosy view of humanity, so much as the alternative is a very bleak one. Not all of us are able to reach our potential, moral or otherwise. But I don't think seeing this reality as demonstrating some people's fundamental characteristic failings is helpful or logical, and our contemporary reality reveals how it leads to more crime, as well as hate.

In his powerful ethnography Punished, Victor Rios demonstrates through observational study the harm that imposing criminal images and assumptions onto young men of color does. The boys and men in his study are treated as criminals from an early age, and they frequently demonstrate through their words and choices how that played a role in their deciding to engage in crime. This shouldn't surprise anyone. When our teachers and parents tell us things about ourselves, most of us believe them to some extent, whether we'd like to or not. The images imposed upon us by authority figures inform how we define ourselves and our future visions (or lack thereof). Combine that truth with the effect of political messaging and mass media about what it means to be a young person of color in this country and it's understandable why the criminal label could have some negative psychological effects.

As people who don't have to struggle to stay out of legal trouble, creating mental distance between ourselves and system-impacted people in marginalized communities is a powerful defense mechanism. Without it, we have to question our role in maintaining structural inequality through these false beliefs. It's much more comforting to believe that 'criminals' simply can't be helped.

But is there some magic threshold where you become this different class of person? How many crimes do you have to commit before it's fair to assign you that identity? Can a person be born to be a criminal?

I reject the notion that reality is so simple and that thinking of people using this framework is realistic or helpful. When you really look into the nature of these distinctions, the answer is not what you might expect.

A person may choose to commit crimes, but we make them a criminal.

Previous Restorative Justice at the University